wherever the thunder rumbles down

My Big Breakwherever the thunder rumbles down

This is a biz-heavy email - - a number of topics to cover here:

An update from last week’s virus exposure scare: though there were a number of confirmed, positive, breakthrough cases in the group of people exposed, I myself continually tested negative, despite having active symptoms that were confirmed to be “some type of viral infection” by a doctor. Weird stuff, and I chose to quarantine for the week plus anyway (I am glad that part is over).

There are two truths I hope to impart on you in talking about this: one, the vaccines absolutely work, as the majority of people exposed did not get sick and those who did exhibit symptoms had an unpleasant but manageable, hospital-free time. Two, breakthrough infections are a real-deal thing, so consider wearing your masks more often and, for the love of god, if you’re experiencing any kind of cold or cough or fever type symptoms stay the hell home.

Since I did indeed test negative, I’m gonna come down to NYC and play my first show there in a really long time. I’ll be performing as part of Braided Sound, a radical improvisation series curated by and based on paintings by field-recording cassette tape DJ and vocalist Jesse Perlstein. Also joining the ensemble are percussionist Nava Duknelman and synthesist Maria Takeuchi. We’ll be performing at Shapeshifter Lab in Brooklyn where you can either attend in person (vax’d & masked, obviously) or stream it via their website. Should be tremendous and I’m so deeply glad it can happen at all. All the info you need here, and here’s the flyer: 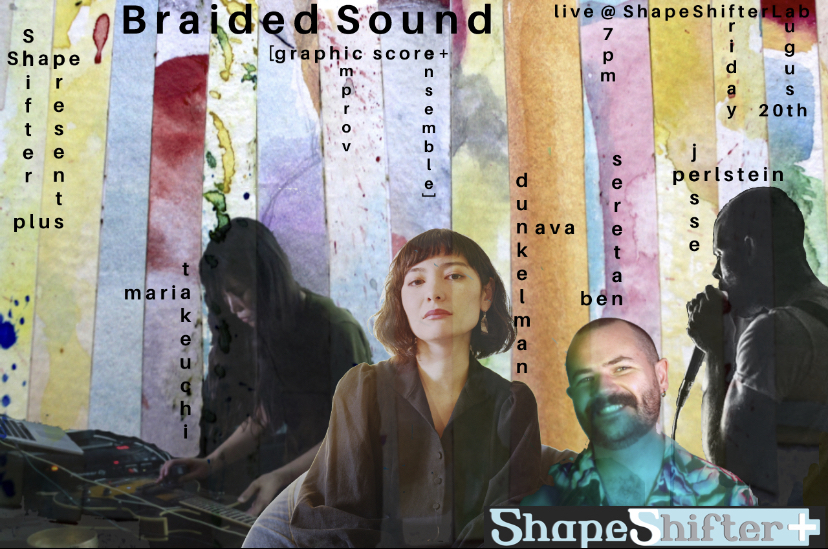 On Saturday we originally planned to host the incredible artist / writer Shanekia McIntosh as part of OTHER SOUNDS, the experimental performance series I’ve been curating at Dewey Hall in Sheffield, MA. These shows were meant to be outside but a tropical depression is rolling through and lightning is super likely, so we’ve decided to simply postpone until a later date. We’re hoping Shanekia can come through and do a reading in connection with the upcoming release of her book in October - stay tuned.

Finally - again due to those wonderful negative test results - I am indeed going to be able to take part in the Flux Factory residency at the ARoS museum in Aarhus, Denmark! I’m gonna be over there for three whole weeks making some tunes, hosting some intensive listening workshops, and putting on at least one screening of all of the videos for CICADA WAVES. Do I have any newsletter readers in Denmark?

The high school youth groups I went to in my teens both convened in enormous temporary tents put up in the parking lots - they were as far away from the main chapels as you could get while still being on the property, still within spitting distance of the adult congregation. That we raised our hands to the heavens in these non-permanent buildings - architecture that would one day be rolled up and shipped out - never occurred to us, and I didn’t attend services long enough to see what it was they went on to build with these sites of worship as a stopgap. But church happens wherever the congregation gathers, wherever the spirit moves within them, wherever the thunder rumbles down.

The youth groups offered you your peers, better music, a pastor that could surf, and a better, louder soundsystem with brighter, wilder lights than the local all-ages punk venue. The church band I played bass for was riotous and, safe in the knowledge that I was thudding in the service of the Lord, it felt cooler and more important than almost anything that’s come after. I was never shaky in my faith when we played. The jubilant, joyful noise was ordained, blessed by lightning, a deeper-than-gospel realization of God’s unending love.

But one day, suddenly, God’s love became less compelling, and when I wasn’t helping to lead the praising of His name I felt less yoked to the scripture. My parents split up, I moved for the first time in my life, and the complex machinations of high school eventually overtook any interest I had in attending church multiple times a week. I became a vegetarian and took a bus to San Francisco to protest the war in Iraq. For a brief moment I went to Hare Krishna services with my brother’s girlfriend, a deep abandonment of my faith. Their chanting was lovely, actually, and the harmonium breathed in and out with a reassuring constancy - this was unamplified music, the simple but profound power of voices raised together in a room, a worship of a creator that required no elaborate stage and took no tips from the band U2. It wasn’t exactly the thing for me, but I could see how compelling it was for others - their closed eyes, their shaved heads bobbing to the music, their saffron robes.

Then - playing even louder music with my other reckless friends turned out to kick way more ass than devoutly following chord charts in church. I don’t think I would have realized it at the time, but our chaotic band practices were a fine substitute for the trinity, something that made us feel sweaty and passably capable of wonderful things. We were writing our own scripture with the garage’s electricity. We screamed, we panted, we played our instruments until they broke. But make no mistake - we were absolute boneheads. There was a profundity to our lack of grace, a doggy-paddle determination to rattle the subdivision. It felt fucking great - the cosmic psalms of spring reverbs and bashed crash cymbals.

Years later on the coast of a different ocean it came to my attention that there was a Quaker meeting that took place every Sunday in an unassuming building on the other end of campus. I had never met any Friends before moving to Connecticut, but I remember being very moved when someone who lived in my dorm described the traditions of a Quaker wedding. How present the silence, and how loud the well-wishes from members of the congregation, when moved. One early Sunday morning - ears still ringing from the night before - I wandered into the room. The silence was indeed profound - I could hear my own hangover throbbing and I could count each fleck of dust suspended in each sunbeam. There wasn’t much said, but the oldest Friend in attendance made her feelings known: to summarize, fuck war. Her righteousness was entire and her pacifism felt mighty and correct, as pure and sharp as a knife straight from the forge’s fire.

More recently I finally brought the walls down far enough to stay out dancing until dawn. Part of me had wanted to do so for as long as I could remember, but some combination of extreme self-consciousness and a fear of bodily exultation - no doubt a vestigial remnant of my days worshipping in parking lots - kept me from giving in. And that’s the trick to it - the giving in is where the joy resides, the surrender is the salvation. Allow yourself to move, allow yourself to be moved, let the selected tunes wash over you, two-step until daybreak and let your funny little body wiggle, a whole room kelp forest that trembles in time in waves of bass. There is a place beyond feeling comfortable, a place beyond language-laden thoughts, a place beyond feeling your distinctness from the group, that sometimes you can grasp, when the conditions are just so. It’s a fleeting peace, one brief spark of coherence, but nowhere does it come more regularly than in the throes of the tunes.

The question is, then: how, when, and where to feel the presence? What can we bask in? What will compel us in the challenging moments ahead to lift our skinny wrists to the sky? Did the internet ever truly allow us to feel together? If I can’t feel your breathing and the heartbeats in your chest, however subtly, are we really interacting? How can the thunder ever possibly rumble down again?

You just read issue #80 of My Big Break. You can also browse the full archives of this newsletter.