the heft of something actual

My Big Breakthe heft of something actual 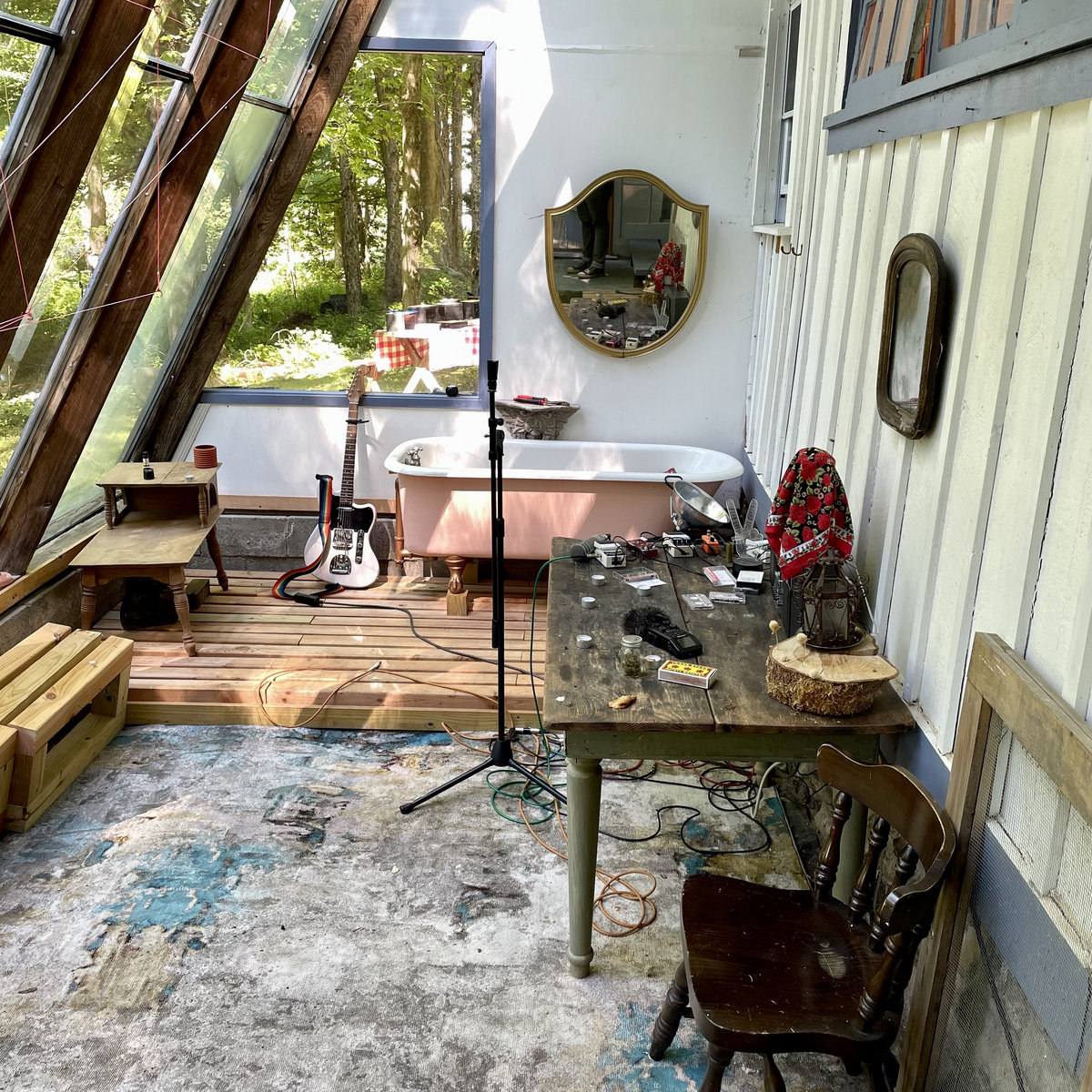 today's track is a series of lopsided circles rolling around each other, an attempt at making something restful and deep in a hurry

wanted to mention this: my sweetie the sculptor Gracelee Lawrence has a humongous solo show opening in Manhattan tomorrow at Postmasters Gallery. i'm really invested in and excited for this exhibition, not only because I spent something like 100+ hours of my life helping to fabricate some of it. there's an opening reception 5-8pm on Friday and I would love to hang with you there, check the flyer:

Four nights in a row of what I can only describe as terrible abundance. Each night felt remarkably great, too much so - it felt like someone had made an accounting error, put an extra zero on the paycheck. We had so much, would they be coming to take it back from us?

On Thursday I returned to that angular, tall-ceilinged gallery in my old neighborhood and we filled the space with red/blue light and a waterfall of fog machine rolling down the wall under the DJ booth. Jake's ride cymbal bounced off every surface and for the first time since I had gotten over COVID my voice felt strong and reliable, the crossbeam in an old wooden house. You never know who's going to be in town when you play in NYC and I was so happy to see some of those surprise faces, hugs and shoulder squeezes. I kept wanting to say, "well come here and let me take a look at ya." After the gig we ate sloppy 1am bodega sandwiches and then drove to New Jersey to sleep in the blissful hum of a friend's parent's guest room's air conditioner.

Friday was, as I said in a tweet, perhaps among the top five nights I've ever had playing music for people. My friend (the artist Leah Guadagnoli, whose work is great) went truly wild in hosting - her house, carved out of a former church on the border of Massachusetts, is already one of the more wonderful places I've ever played music. She could have simply said yes and opened the door and it would have been better than almost any bar I've ever been to. But the bounty of her hosting! Fresh, crispy pizzas for all, featuring vegetables and pesto fresh from the garden! A dazzling and very boozy punch, singing with fresh fruit! Something like a dozen pies! A bathtub full of ice and all the leftover booze from her previous parties! A roaring bonfire behind the bands and a triangular room of windows for the solo acts, candles all around! Radishes before bed, radishes for breakfast! Chickens running around and cooing in the morning! And we all woke up happy to see the intrepid folks who had crashed and camped, good morning!

On Saturday it felt that we were taking one step further out, driving one hour more, playing to fewer sure fans, fewer known pals. Maybe it'd be a dud, we had been somewhat warned, but my buddy Alex booked the show and I cherish the man, who is cheerful and refreshingly affectionate with a cute little mustache. Yet another beautiful space, keyhole windows and off kilter quilts hanging from gallery ceilings. Folks came out, artisanal local ice cream got scooped, and for the third time in a row I got to hear my friend's set (Jake kept talking about how it feels so nice when someone else's music becomes an important part of your day). Stayed up late for no reason in our friend's apartment and in the morning we went swimming in - I think - Narragansett Bay.

I'm scared of the last song I sung on Sunday. When I sat down at the piano, my hands felt weak, like I wouldn't be able to hold a glass of water. I was happy that the position of the piano forced me to face the wall, made it such that making eye contact with the dozen or so people left in the audience would be nearly impossible. I set a guitar loop in motion, left it swirling to my left, and started playing the song, a very rudimentary set of two-note intervals I could play with my two wobbly index fingers. After a few false starts my voice piped up, a rickety propellor plane finally lifting skyward.

I've sung this song many times, had even sung it once on that exact stage. But as I said, the song scared me, and on that hot, muggy afternoon when I first sang the chorus - music that simply occurred to me - I yanked my hands off the piano like my fingertips were burning and cried laying in a ball in the middle of the floor. Never so viscerally have I felt the phrase "it struck a chord with me" - I felt like a rung bell. And ever since it was written I've been trying to tamp it down with tricks and smoke. When I first played it on guitar after group dinner that week I gave it a rollicking country strum, and every other time I've played it live it's been done as karaoke with a cassette-tape backing track full of gated reverb claps and towering kick drums, goofy. Once I came close to playing the real thing on my friend's internet radio show, but I chose the least tasteful electric piano tone I could find, felt safe in that. I was wrapping something profound for me in corniness, which isn't necessarily a bad thing - I like lots of corny music, I think I even might identify as corny.

But I didn't feel like I had given enough, didn't feel like I had fully earned the privilege of attention. I wanted to give something, to do something, to have one authentic moment of connection. So I played the song as it had originally appeared to me, spare chords, tears, and all. It felt good, and I felt like I could hear the words still ringing out in the space after I unplugged my guitar. It had the heft of something actual, something given, something gained.

And then they came and cleared up the accounting error - on the way to Vermont we stopped in a parking lot of a CVS to do a million phone calls and a couple of nose swabs and it just shook out that we ought not play the show. But all was not lost, we drove home and swam again, and a few more hours in the company of others was almost as good as playing the gig. Music is people gathered.

But what about you? Are you living in abundance? Are you feeling like a struck bell? Are you swabbing in the parking lot?

You just read issue #121 of My Big Break. You can also browse the full archives of this newsletter.