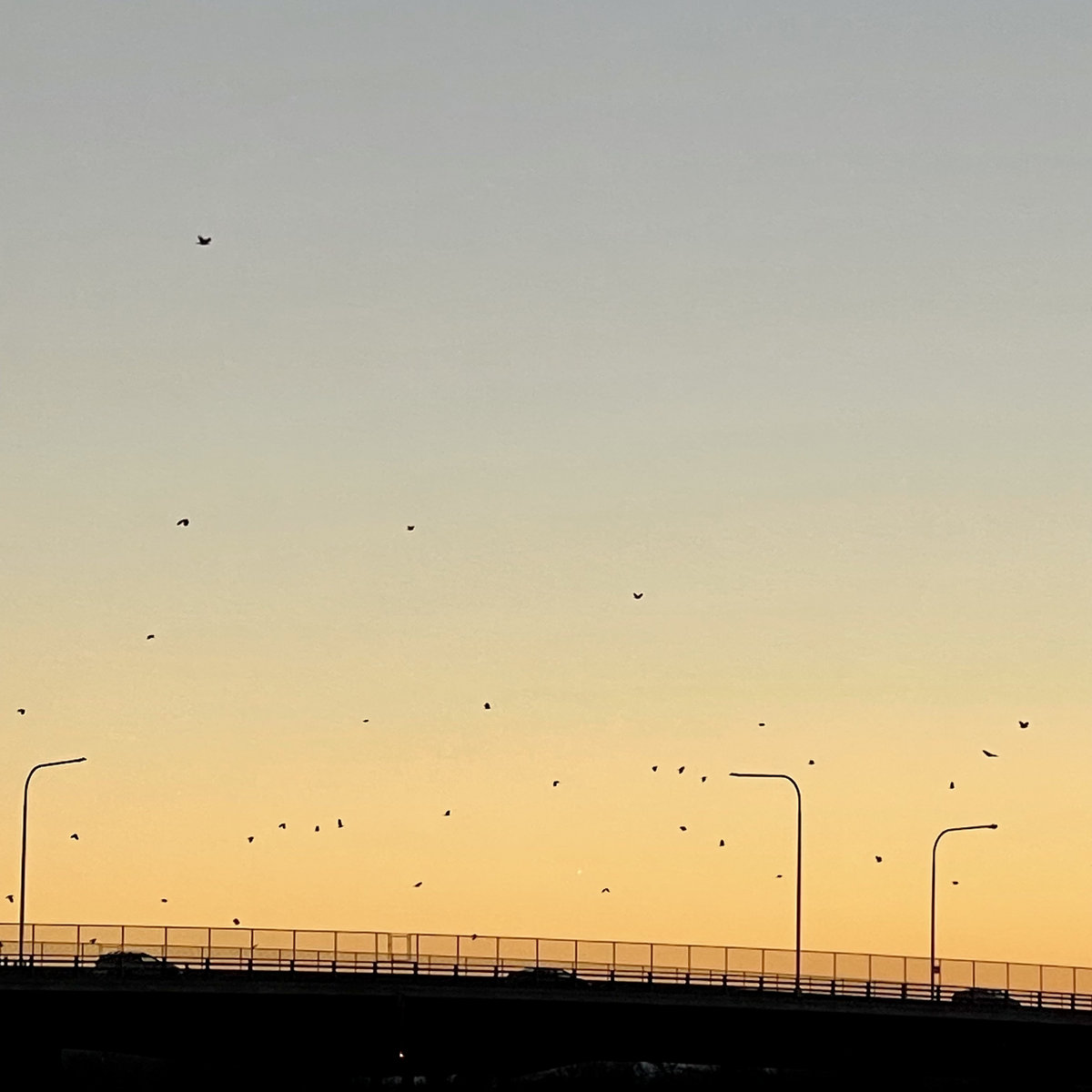 today's track is a stack of guitar loops riding a cassette tape snake, eating its own tail, with some ghosts of cicadas at the beginning ~

i am playing a show in nyc on sunday! it feels very nice to type that out. i'll be part of big spin, a 7-piece band backing up my friend and fiendish drummer matt evans at tv eye in ridgewood. get your tickets here and come swirl with us ~

really struggled to get you something today ~ i've had a lot of hired work lately and kinda didn't have much in the tank as a result, i think. but it's important to me that i keep showing up - - that's what makes it a practice. i hope you are showing up for whatever you're practicing today, too.

In 2010 a band I often played banjo for got invited to play a show in Los Angeles, opening for a bigger band at a fairly historic venue in West Hollywood. The songwriter worked up some kind of grant from a local Jewish community organization - a lot of the songs dealt with mysticism and Judaica, plus my bandleader and the other act on the bill had met at Jewish summer camp a few years previous, so they were eager to pay for our plane tickets. I was 21 years old and very pumped on telling my professors that I had to miss class for a week because of a sick gig in LA.

We spent the week crashing on a local music industry person's floor at her apartment in Echo Park. We'd drive around blasting Steely Dan in a rented minivan as we drove up and down Sunset, and one day we got stoned and made the long uphill walk through Elysian Park to catch an afternoon Dodgers game from the cheapest seats possible. Later in the green room at the venue I thought I might be able to get the Dodgers to let us sing the national anthem, so I gave their offices a call and pretended to be our own manager - got as far as the vice president of promotions before getting denied. We swam in the ocean. We went to Venice Beach where our friend pointed out every house that served as a filming location for porn, then we played a show at Occidental College where, I'm pretty sure, my other band with the trumpet player did an opening set. We were named Sweaty Boys and all of our music has since been scrubbed from MySpace. I remember wearing a bright red American Apparel hoodie all week long and feeling very cool. I had recently stopped being vegetarian. I had my left nostril pierced.

The show felt more charged and more real than maybe any show I had ever played before, except for maybe my first few outings in the real deal church band. I remember learning for the first time that people did in fact work in the music industry - there were people only a couple years older than me who actually made money helping bands make and sell records and somehow this very obviously true thing had never felt particularly actual to me before. This was, I think, the first show I ever played as an adult at a venue within driving distance of my California family and they very sweetly arrived, but I think at least one member of their party fell asleep in the balcony. We played well, as I remember, a big, overstuffed band running down every song a little too fast, plied with snacks and drinks. The other band ripped.

One of these actualized music industry people set up a promotional appearance for us which involved us cramming into a walk in closet packed to the gills with various Dickies clothing and playing a thrown-together acoustic set for a web series. I might have played a melodica, and tragically it looks like whatever website hosted that web series has long folded - can't find it anywhere online. As a thank you and, I think, our only form of payment, we were graciously allowed to pick literally any item of clothing we wanted from the entire Dickies catalog, and if they didn't have it on hand in the closet they would mail it to us from the main warehouse. They were offering us hundreds and hundreds of dollars worth of clothes, I suppose in the hopes that we would continue being cool music band people while wearing their stuff. It was bewildering at a time when I hardly believed that anything I did could be worth paying for - here was my normally intangible social cache manifesting as actual new clothes, all for sometimes playing the banjo. I remember selecting a white pair of painter's pants, not sure what happened to those. And then a sturdy-looking denim work jacket which I have worn every single winter for thirteen years - I wore it today, in fact, walking around my town at dusk and thinking about how the events of your life are written right on you, you could run your finger along the inside of your arm and read it.

I know that these things happened - the jacket is frayed at every edge, losing stuffing in the right sleeve, and there are a scattering of photos in a forgotten album on my facebook profile, shot with what must have been a digital camera, comments from people who I have completely lost track of. I remember the eerie sensation of returning to California as someone other than the 17-year-old who left it. I remember cramming our instruments into the overhead compartments on the flight, but I'm not sure how we got to JFK. I don't remember the name of the person whose house we crashed at, but I remember wandering out one morning before anyone else had woken up and strolling through the park. I don't remember the guitar parts I played, or whether or not my banjo made the trip, or what we were eating or how long we stayed. I have told this story about myself many times because it was fun, the type of thing I wish I got to do all the time - friends of mine and I in transit and singing. In holding on to this moment - repeating it here - and onto the busted jacket which is its token, I'm welcoming those circumstances, intoning them, calling them forth from the beyond. Which is really the secret dark art happening beneath the surface anytime we tell what it is we are - we make our little worlds with the saying of the story. And one time I got a warm jacket in the mail because I played a banjo in Los Angeles.

But what about you? Where'd you get your winter coat? Have you ever talked your way onto the field? What story are you writing on your person?

You just read issue #105 of My Big Break. You can also browse the full archives of this newsletter.