big breaths are coming in and in and in

(click the link / statue in the fog to listen) 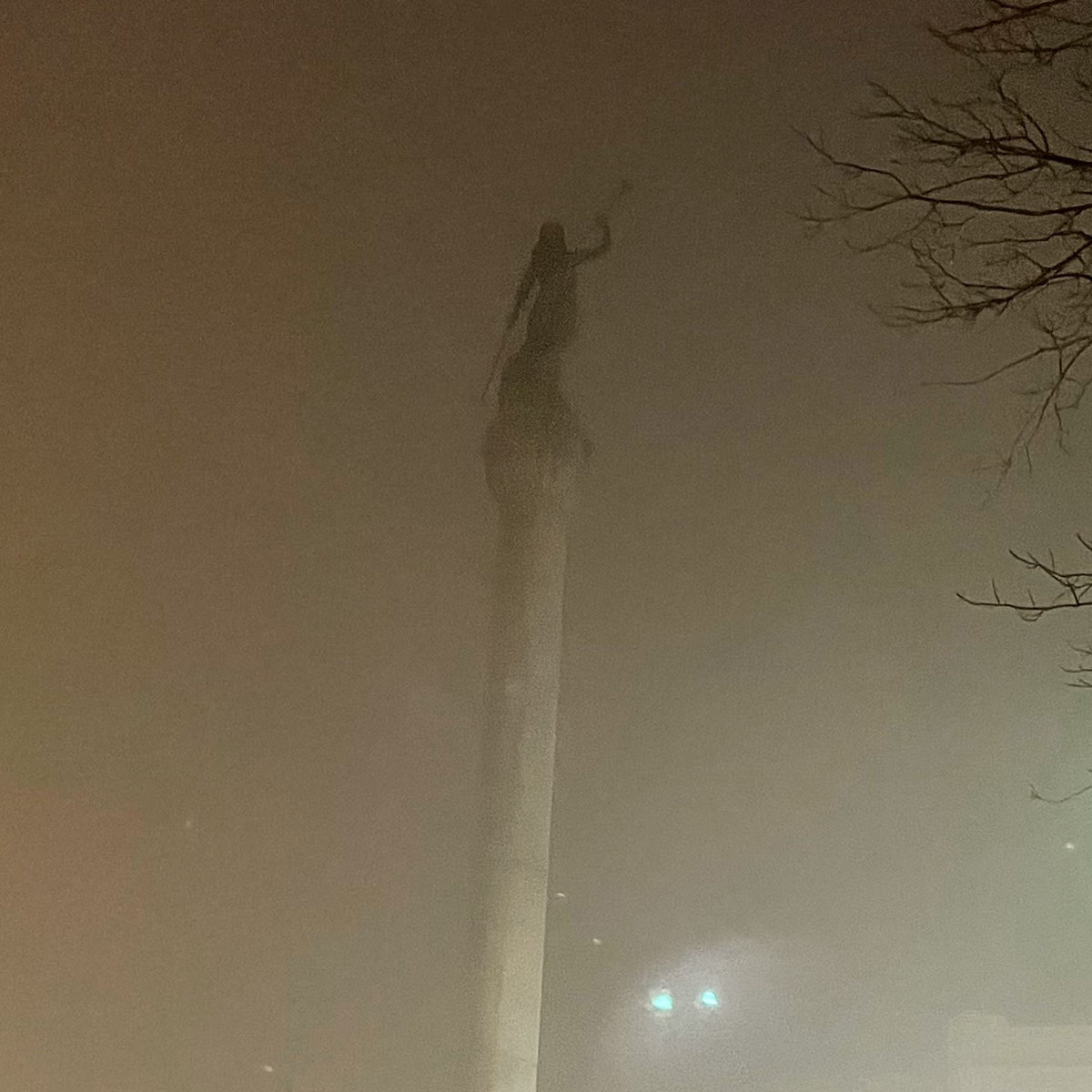 My Big Breakbig breaths are coming in and in and in

today's track is very cute - it sounds like an animated raccoon in overalls walking down the street, at least in the first half

we're back! i took last week off and, for a minute there, thought that I might end the project entirely. but a lot of people told me they'd miss it, and then this morning i got a really sweet message out of the blue that convinced me to keep going. plus i really missed doing the work. one big change, though - - i think I'm only going to write you every other week. a more relaxed pace that hopefully makes this space more special and gives the work a little more time to breathe and mature (hope that's cool with you).

i'm pretty sure i do have some readers in alabama, but i'm not sure if any of you are within spitting distance of auburn university - well! if you are, i'll be recreating a version of cicada waves at the university museum tonight, playing a baby grand piano that has hopefully been schlepped out to the sculpture garden. it's free, starts at 6pm, presented as part of the massive and very inspiring Tommy Coleman solo show currently on view ~

and then I'm flying back to new york state for a Sunday evening show at Avalon Lounge, one of the best ever places. Allegra Krieger is on the bill and she is just a wonderful songwriter, hope to see you there.

My favorite thing about playing an out-of-town show is that long moment between arriving in the place and then finally getting to do the thing you're there to do. It often means that you're at a local bar in a town you've never been to hours before any real customers come by - you get to see the place with the lights on, you get to see the bartenders slicing limes and filling up their little flip top containers of cherries, you get to cash in your drink ticket before happy hour, if you want to. Small talk ebbs and flows, you can hear a fruit fly buzzing, everyone calls their partner and paces. Sometimes the arrival means waiting for someone - typically a stranger - to pick you up from a train station, as often seems to be the case in Italy (flashback to trying to figure out how to use a payphone with foreign currency and foreign language in the dusty summer of 2015, please don't tell me I've traveled all this way to miss the yoga festival in a field of sunflowers by getting stranded in the station in Sezzadio). Today, because there is institutional money involved, this blank post-arrival time involved cable television and overpowered hotel air conditioning breezing across my nude torso, a Nespresso machine whirring in the background - nothing in particular to do for a while in a place I've never been before.

It's delicious to get to exist in a new context for a time. Really, playing out of town feels like getting to decide afresh who you really are, or maybe it feels like playing a costumed version of yourself, portraying yourself. You have, maybe, twenty-four hours to make an impression, to have a meaningful interaction, to leave the place better than you found it. Who do I want to be in this city in Alabama? I want to be the big, joyful presence in the room who is grateful for the space. I want to be nice to the people who work there, I want to shake their hands and remember their names and tip them well. I want to make a good impression on the people who have conspired to bring me in. I want my presence to be memorable and enriching. I want the realization of my character to be just as compelling as the best set of music I've ever played.

And then there is the walking around, which is one of my true joys in life - simply going somewhere other than where I live and seeing what there is to see on foot (walking around the town I live in is pretty great, too). There are a million things to notice: flora and fauna, bugs and birds, whether or not people smile at you on the street, the way the light looks, the voice in which the crossing signal speaks, the music playing from cars passing by, the speed at which people walk, the architecture, the creeping American/global monoculture of chain restaurants choking the town out like kudzu vines, how many Chik-fil-a locations does one Southern college town need?

Noticed on an afternoon walk:

-an elegant row of dark-leafed magnolia trees, not yet in bloom

-the seething, hissing sound of an unidentified evening bug in the parking lot of the hotel

-the absolutely meticulous care afforded to the campus, one of the cleanest places I think I've ever been

-not many smiles from strangers, but here everyone I do not know personally calls me sir as polite as can be

Which all leads to a complicated series of questions:

In your everyday life, when you're no longer out of town, why do you notice so little? What have you started taking for granted? Why are you not paying attention to the vast majority of your life?

When you're back home, why can't you be the big, gregarious, charmer you set out to be in these news places? What is preventing you from being the person you want to be - the person you believe yourself truly to be - on a daily basis?

Could you not, with a little bit of effort, let yourself live in a constant moment of arrival?

Because, that moment of arrival is built on having left somewhere else. For every afternoon bar you walk into, there's another set of saloon doors still swinging, the outline of your weary ass drawn in the dust. When you're out of town you only have to keep up the charade of your being wonderful for a day or two at most. It reminds me a little bit of how I used to be terrified of taking my shirt off at the pool or at the beach, but for a while there I thought I'd fooled them all. There was a particular way I could stand - hands on hips - and a particular way I could suck in my little kid belly that might, maybe, make it look like my body was in the same ballpark as most of the other people. It felt like it worked, and then I'd simply jump in the deepest end, hiding underwater. Which was all well and good until once a summer camp counselor called me out on it - why are you standing like that? are you okay? In other words, when you're home, you have to exhale every once in a while. But until then the handshakes are large and I am worth inviting to play music and the big breaths are coming in and in and in.

But what about you? How are you walking into the room? Who do you really want to be? What are you doing between now and the gig?

You just read issue #113 of My Big Break. You can also browse the full archives of this newsletter.